Joseph Gidjunis, owner of JPG Photo & Video, picked up his first camera when he was a sophomore in high school. It was the 90’s — the film days when there was still such a thing as a dark room — when Joe was encouraged by his mother to pursue his photography interest, so she bought him the introductory Canon Rebel camera. At the time, Joe was being mentored by a senior photographer who was far more experienced than he. But, when the senior was caught breaking some rules in the dark room, the student journalists for the newspaper and literary art magazine looked to Joe.

“They were looking at me saying, ‘If we’re going to have photos for the rest of the year, you better step up,’” he said. “I kind of fell into it and fortunately, I liked it.”

By his senior year of high school, Joe was interning with a wedding photography company and even worked for a period of time at the JCPenney photo studio. Though photography was always a passion of his, his focus shifted in college after the events on September 11th.

“I saw the real need for journalists and the real role of reporters then,” Joe recalled. “So, my degree is actually in writing, not in photography. All of my photography experience has been on the job — every newspaper job or internship I ever had, I always did both.”

Joe’s interest in wedding photography started in 2004 when he shot his first wedding.

“My first actual wedding as a photography was how most start — with a friend or family member — and mine was my cousin’s wedding,” Joe said. “She still has those photos up on her wall and everytime I see them I say, ‘Please let me redo your wedding photos,’ but I know she cherishes them.”

The next year, while he was working as a newspaper journalist, he officially launched his own photography business on the side that grew quicker than he ever imagined.

“I was doing 50-60 hours a week reporting, and I still did 27 weddings that first year. That’s also the year I got married myself,” Joe recalled.
Joe’s business continued to expand with the help of his wife Rebecca and by 2010, he had his first employee.

“I ended up paying her more money that year than I ever made myself and I was thinking, ‘What’s the priority in my life right now?’” Joe said.

That’s when he made the decision to leave the newspaper industry for good and focus on his photography business full-time — and boy, was that the right decision.

Within the year, Joe had gone from doing 50 weddings a year up to 85, an almost 60 percent increase.

“I was adding staff left and right,” Joe said. “It was my first time managing people — I didn’t know how to run a business and I didn’t go to business school. I made a ton of mistakes.”

Since then, Joe said he has always tried to figure out different management styles that work for him and he feels like he finally has found it. It’s safe to assume his 11 staff members and 19 freelancers agree.

“I always wanted a team,” Joe said. “The idea of working by yourself at the computer all day long, some people thrive at that, I’m all about the experience — the people, the team, that’s why I do it. I didn’t like that there were so many like-minded photographers competing against each other when our resources were so limited to begin with. I wanted a place to bring them all together.”

Everyone on the JPG team has their own individual talents, and some even have photography businesses of their own. But, Joe said most of them come here because they like being a part of the team and the clientele that JPG draws in.

“It’s all about putting people where their strengths are,” Joe said. 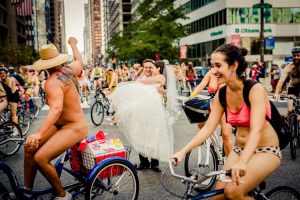 When it comes to the clientele that JPG draws, Joe tells potential clients that there are three things every JPG couple has. The first is a great sense of humor; they can laugh at themselves — at life and at each other. The second is a great sense of adventure. And lastly, JPG clients are people who love great art, but aren’t used to being the center of attention.

Having clients that fit this criteria allows Joe and his team to capture moment-driven photography focused on emotion, humor, and the atypical.
“Weddings are often seen as traditional, stoic, and they have a certain look,” Joe said. “I always came at it like, ‘Weddings are much more fun, they can be humorous and they can be outlandish.’ Our clients hire us because they don’t want to feel staged and they don’t want to be manipulated. They hire us for the unexpected.”

And the unexpected is certainly what they get when they work with JPG. One of Joe’s most notable wedding photos was taken in 2009 at the inaugural Naked Bike Ride.

“We had heard it was going to happen, but we didn’t know what it was — nobody did,” Joe laughed. “That photo was the moment that helped define what I wanted our studio to be. That moment said to me, ‘You don’t need to be so serious on your wedding day.’ There are couples that wouldn’t touch that with a 10-foot pole, and then there are couples who love that photo.”

In fact, as a litmus test, Joe keeps that photo on the front page of his website.

“If you laugh at this, you’re going to contact us. If you don’t, you won’t contact us and that’s alright because we aren’t the right fit for you,” Joe said.
Another one of Joe’s memorable photography moments was for one of his clients’ engagement shoots.

“They were both doctors and they didn’t have a lot of time because they were both in residency,” Joe said. “I asked them what they do in their spare time for fun and they joked and said ‘laundry.’ I said, ‘Don’t tease me right now because I have an idea.’”

They called a local laundromat and after a small white lie about how the couple met there, Joe spent an afternoon capturing the couple doing what they love to do in the spare time together: laundry.

“It’s still one of my favorite photo locations and the photos are hysterical,” he said. “I joke with people that I don’t care what’s important to you. It needs to be significant to them so I can tell their best story through photos.” 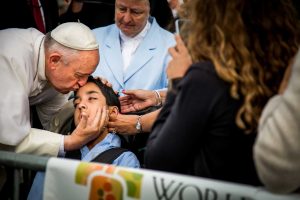 Though Joe started his business in the wedding photography sector, for the past five years, he and his team have been making a push into videography and are now doing work for corporate and nonprofit clients too.

Laura Hoffman, who is currently JPG’s longest running staff member, has been the biggest push for video.

“Laura has been an integral part of our video growth and being able to understand my vision and translate that on the screen. It’s amazing,” Joe said. “She is the editing vision of the team as the senior editor and I’m the director, but if we don’t work well together, the project doesn’t happen.”

From commercials that run on television to video content for the grand opening of the new Museum of the American Revolution, JPG continues to expand their brand and reach a variety of people from their home office on Green Lane in Manayunk.

The building is home to both the JPG studio and to Joe, his wife Rebecca, and their one-year-old son.

“I love the diversity of Main Street and I love the vibe that Manayunk has — it’s young, it’s energetic and it’s a neighborhood everyone knows,” Joe said. “When you say you don’t just live in Philadelphia but you live in Manayunk, there’s a positive connotation to it that I just love.”

Now that Joe and Rebecca are raising their son here as well, they are enjoying the benefits of being able to walk everywhere, having a variety of restaurants nearby, and being close to the trail, though Joe laughed that pushing a stroller up the hill on Green Lane can be tough.

It was important for Joe to not just have his studio in Manayunk, but truly be a part of the community.

“We made a choice — this wasn’t just real estate, this was the community we were after and wanted to be a part of,” Joe said. “This community has made a home for us and we always want to make it better. We love being able to showcase all of the great things that Manayunk does. Being a photographer for so many of those events, it feels like we’ve been a part of them too. When Manayunk does well, we do well.”

At the end of the day, Joe said he does it all for the people — his clients and his team.

As for his team, Joe said he wouldn’t be able to do it without them.

“We will do 150 weddings this year between photo, video, and our photobooth,” Joe said. “I’m only doing 30 of them. There’s a number of people who make this place run, it’s not just me. I have the vision, but they are producing such a high caliber of work everyday and I’m so lucky to have such a great team.”
“When I can’t tell who took the photo, that’s awesome. I’m like, ‘Nice damn job, guys,’” Joe laughed. “Everyone has their own eyes and they are bringing their own perspective to any given day, but everyone here believes that people just need to have more fun on their wedding day.”

If you use the photo of Joe with Mayor Jim Kenney, please use this caption with it: Joe Gidjunis (second from left) was an official photographer for Philadelphia Mayor Jim Kenney during his first year in office. He currently still does photo and video work for his administration.