If you venture far enough down Cresson Street, you’ll stumble upon the Dawson Street Pub: an unassuming, rustic corner bar that’s served the neighborhood for nearly 30 years. In a quaint space with just 10 barstools and a handful of tables, owner and Roxborough native, Dave Wilby, has watched his bar evolve into a home for numerous regulars, including craft beer enthusiasts and music fans.

“Over the years, the bar got a comfortable feel for a lot of people,” Dave said. “Some patrons use the term “dive,” but the main vibe is kind of like going to somebody’s living room and hanging out more than just going to a bar. That’s the underlying feeling that people get when they come in here and it’s why they keep coming back.”

After studying hotel and restaurant management at Penn State, Dave went on to manage The Yacht Club in Sea Isle City, NJ. Dave’s father, Ed, caught wind of his son’s success in the industry. Preparing to retire from the Navy Yard, Ed decided to start a business that would serve as his personal investment and a jumping off point for Dave’s career. 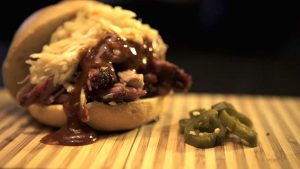 The neighborhood was still up and coming in 1988, so Dave and his father sought to purchase a building around Manayunk to house their bar. As many locations on Main Street surpassed their price range, they searched for spots on side streets that were already in operation. Eventually, they came across a bar called Uncle Charlie’s at at 100 Dawson Street and acquired the space. Dave and Ed knew the bar had lots of potential, but some serious adjustments needed to be made to attract new patrons.

“We couldn’t maintain business the way it was because it was a really hardcore, old-school neighborhood bar,” Dave said. “There was a biker gang that basically ran the place. If we kept that clientele, we would’ve ran out of business anyway because there was no room for growth there. The neighborhood was changing around it and they were scaring the neighbors away.”

In an effort to bring in a new crowd, Dave focused on two key components: better beer and local music.

At the time, the “craft beer” scene in Philadelphia was virtually nonexistent. While a handful of microbreweries popped up on the West Coast in the late 80s and early 90s, imports dominated the better beer scene along the East Coast. But in 1995, Dawson Street Pub was put on the map as it partnered with a small brewery getting its start in a neighborhood garage on Krams Avenue.

“The craft beer market here really took off in the mid 90s when Yards opened,” Dave said. “We were the first bar to sell Yards in Philly. It’s only by a couple of days that other accounts picked them up, but we were the first one to tap a keg of Yards. That was really good for us because we got a ton of free press.”

That tapping of Yards Extra Special Ale led to write-ups from Philly Weekly and City Paper and a conversation among beer aficionados about the best places to try craft brews. Sure enough, Dawson Street Pub made the grade. Today, the bar has 12 taps, three beer engines, and more than 80 different bottles in a variety of styles from breweries near and far.

While some patrons come in for the beer selection, others fall in love with the local music scene that manifested itself at Dawson Street Pub. Having grown up in Roxborough and played in a band in college, Dave saw an opportunity to give friends and familiar faces around the neighborhood a venue to showcase their creativity.

Dave managed all the music booking up until nine years ago, when he passed the torch to Russell Eisenlohr of Blinkin Lincoln Productions. With Russell at the helm and support from WXPN host and Dawson Street Pub patron Dan Reed, the bar became a must-play venue for singer-songwriters all across the city. Acts like Chris Kasper, Ben Arnold, Scott Bricklin, and most notably Amos Lee have all graced the pub with their music. Hosting live music Thursday night through Saturday night and a well-attended Open Mic Night every Wednesday, you never know who or what to expect on any given night at Dawson.
“The music scene here kind of grew organically out of the people that we knew from the neighborhood that just started to hang out here,” Dave said. “When you have an Open Mic Night where Ben Arnold shows up pretty regularly, that keeps people coming back.”

Over the last few years, the pub’s regulars have grown accustomed to two monthly events that always draw a crowd. The first is Fred Berman and Dan Reed’s Record Party. The duo spins vinyl all night that usually pertain to a certain theme, and they invite different guest DJs to select some of their favorite records. Some notable guest hosts include Eric Bazilian (The Hooters), Pete Donnelly (The Figgs), other WXPN DJs, and even Fred and Dan’s wives.

The other staple event at Dawson Street Pub is Tom Bera’s Philly Blind Pig BBQ. On the third weekend of the month, the bar scales back their food menu to strictly vegetarian options as Tom sets up his smoker out front of the bar all weekend to cook for the pub’s hungry patrons.

“If you’re coming for the barbecue and you don’t know Tom and get to meet him, he’s a great character just to sit and have a beer with and talk to. If you know Tom, coming to hang out and having a great brisket is good because his food is really consistent and it’s some of the best barbecue around.”

Looking ahead, Dave has several plans for the bar’s future. His biggest project is giving the façade’s woodwork a facelift to make the bar look like it did back in the 1920s when the railroad track was redone. He’s recently hired a new chef who plans to offer more daily and weekly food specials on their menu. He’s also considered renovating the backyard and patio areas to create more outdoor space for his patrons. And of course, Dave is starting to think about how to celebrate the 30th anniversary of the pub next December.

Dave and his father have always strived to make their bar an asset to the community. Ever since Dawson Street Pub opened, its reputation as a haven for craft beer and live music has spread as a destination throughout the Philadelphia region. Outside of running the bar, Dave has also served as a member of both the Wissahickon Civic Association and the planning committee for the Dude Hates Cancer Bowling Tournament, which got its start at Hi Spot Lanes and has since moved to South Bowl. As the years progress, Dave hopes that Manayunk’s growth coincides with that of the Dawson Street Pub.

“We try to make everyone feel welcome when they come into the bar,” Dave said. “As we’re approaching this 30th anniversary and going forward from there, we’re going to try to be a positive influence in the neighborhood and a comfortable place for people to come enjoy good beer, a decent meal, and check out some good local music.”