Search
Home
DINEConversations with the Chef

What do architecture and food have in common? For James Morrissey, it’s all about the design.
By Brian Anderson
Photography By JPG Photography (jpgphotography.com)

“Main Street is unique, in a way,” James said. “Besides Walnut Street and East Passyunk Avenue, there isn’t this string of excellent restaurants anywhere else, if you think about it.”

It’s why this designer set up shop on opposite ends of Main Street: His interior design and environmental branding firm, Morrissey Design LLC, and partnership in M Architects LLC sits on one end (at the corners of Main Street and Leverington Avenue) and his restaurant/bar, SOMO, sits near another (between Cotton Street and Roxborough Ave).

James is no stranger to restaurants and bars, as his career has been built around designing upscale hospitality brands. SOMO, which James describes as a New American Bistro, is his own creation, and it’s an incredibly personal place.

“The namesake of the place is my daughter, Sophia Morrissey,” he said. “The first two letters of her first and last name. That was it—it stuck.”

After graduating from Philadelphia University with a degree in architecture, James earned a Master’s degree from Savannah College of Art and Design. His career took him to Europe, to Miami, and back to Pennsylvania again; James launched his design firm, Morrissey Design LLC, in 2008, when he returned to the Keystone State and started M Architects LLC with his partners’ years after. For the past decade, designing bars and restaurants has become a niche for Morrissey (James and his firm designed B2 Bluefin in Bala Cynwyd, Jansen in Mount Airy, City Tap House at 2 Logan Square, Chestnut Hill Market, and Paris Bistro in Chestnut Hill).

“It’s exciting. I get to design places where people go every single day to enjoy excellent food and drinks, and quality time with friends, family, or business associates,” James said. “I design spaces that make people happy. It impacts them in a different way. It’s an escape for some people.”

James said the dream of owning a restaurant was just that. Now, it’s become a reality with SOMO, which debuted in April. 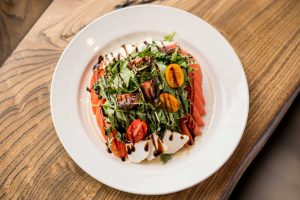 “Creating SOMO was a really fun process,” James said. “We wanted to make it a comfortable place, but also trendy and fun and not overly serious. It’s a place where you can see yourself going more than once a week. We want to be a neighborhood destination and elevate things a little bit, while making it approachable from a menu and design perspective.”

As designers, James and his Morrissey Design team conceived the logo, created the menus, and refined the restaurant’s interior. The space is teeming with different textures and finishes. Take a step inside, and you’re greeted by walnut tables, metal bar stools and chairs, leather booths, subway tile around the bar’s giant mirrors, and lots of exposed stone. You’ll spot a variety of light fixtures with unique styles throughout the restaurant. The thick, white marble bar invites you to rest your elbows on it as you savor on the scrumptious wings or mussels.

The multitude of textures jive well, and SOMO’s persona is friendly and welcoming. The design hits every sense but overwhelms none of them. The place is simple yet upscale, and exhibits an upbeat energy balanced by a super chill vibe.

“What made it really cool was being able to have my hands in everything,” James said. “You can see that common thread throughout the whole restaurant.”
James’s vision shapes SOMO in subtle ways. Take, for example, the twice-a-day happy hours. From 6 to 7 p.m., and again from 10 to 11 p.m., SOMO offers drink specials and menu features. James’s own experience produced this idea: He explained that after many days of leaving the office hours well after 5 p.m., he was drawn to restaurants with robust drink menus and kitchens that served food late. It’s why he wants SOMO to be open and accessible for everyone, regardless of their work schedule.

“We didn’t want the folks that finish work later in the evening to miss out on happy hour,” James said. “Doing that made perfect sense, and it’s something that our regulars really love. It’s been very well received.”

It’s also why SOMO has 24 craft beer taps, expertly crafted cocktails and an evolving menu. Plus, the kitchen closes at midnight every night, which was one of the first decisions James made when he decided to create the brand. 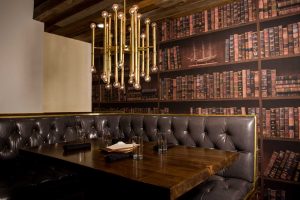 “I didn’t set out to create this special place that you go to only once a month. That’s not what drove this,” James said. “We want to be the place where you always know we’re serving food until midnight. We always close at the hour we’re supposed to. We want to be seen as very hospitable and dependable in that way.”

That choice has paid off. Stop into SOMO and you’re likely to spot a group of friends sitting around a hightop watching football on the bar’s flat screen TV. You might see a middle-aged professional type, still in a collared shirt, and his wife sitting at one end of the bar. Even late, guests are enjoying starters, sandwiches, and main courses.

Behind the bar is head bartender Max Rose, crafting creations designed by mixologist Jeff Bowell. Find a seat, and review one of the most diverse and approachable beer menus in the region. If you prefer a spirit, the cocktail menu offers a variety of vodka, gin, whiskey, and tequila drinks. The wine selection features a dozen wines by the glass, a handful of sakes, and more than a dozen carefully selected bottles from California and Europe.

In the kitchen is Chef Eric Hall. An executive chef for 30 years (his résumé includes Di Bruno Bros., Circa in Philadelphia and La Campagne in Cherry Hill), Eric continues refining the menu to make it accessible and satisfying. In addition to lunch and dinner, SOMO serves weekend brunch — with delicious bottomless mimosas and bloody Marys, of course.

“There are too many things on this menu I want to eat every day,” Eric said. “I like giving people tough decisions regarding what to order.”
Eric describes the menu as “simple and delicious,” but the selection of handcrafted starters, salads, sandwiches, and specialties is relatable with an ounce of refinement. For example, chorizo adds a spicy dimension to the Southern classic, shrimp and grits. Another example is the flatbread, which features pulled pork, arugula, and onions, but gains complexity with a fig spread, slices of manchego cheese, and a drizzle of balsamic vinegar. Rogue Chocolate Stout (available on draft) pairs beautifully with the warm chocolate tart dessert.

Like the rotating draft beer and seasonally changing cocktail list, Chef Hall said the ingredients featured in his dishes are all currently in season, and many of the proteins he utilizes are sourced from pedigree producers, farmers and fishermen. He added that he obsesses about his hope that all guests at SOMO leave satisfied and excited to return.

“We want this to be driven by the neighborhood,” Eric said. “It’s accessible for everyone. We’re focused on producing food that’s really delicious.”
The brains behind SOMO aren’t afraid to innovate. Recently, the restaurant implemented “Buck a Shuck” specials — one dollar oysters — on Tuesdays. There’s live music on Wednesdays. Behind the bar, Max and James introduced a sake menu and have added prosecco onto the tap list. Chef Eric Hall hopes SOMO becomes “a headquarters” where people know they can get a beer or cocktail and “a deliciously prepared dish” anytime.

“What I set out to do was complement what was on the street, and create another destination where people want to gravitate to,” James said. “Manayunk moves at different pulses. We’ve paid very close attention to what the street wants, and are excited to be nimble as well as innovative. I don’t ever want us to say, ‘Well that’s how we do it’ when people want something different.”

“There’s already a discussion internally about expanding the space,” James said, but he’s taking a wait and see approach for now. In the meantime, James, Eric, Max are already working on new menu items and beer, wine and cocktail offerings, and obsessing about how to continue to ‘be the hosts with the most’ in bustling Manayunk.

It’s difficult for James to contain his excitement about working and owning a restaurant in Manayunk (it’s a 10-minute walk from his M Design’s location to SOMO). It’s the identical energy you’ll see up and down Main Street on a typical Saturday night.

“One thing about Manayunk that makes it really cool is it’s very much a neighborhood that has a vibrancy,” James said. “There’s a lot of businesses that have been here for a long time. When the opportunity came to move our office here, and SOMO became another opportunity, it just felt right.”

“It very much feels like you’re in a community, and that’s something I really wanted,” James continued. “I fully committed to making it a home run, I’m here for the long haul.”

But what about Sophia, the 7-year-old second grader, whose name inspired the restaurant?