When Davida Levin, owner of the first children’s and maternity consignment shop in Manayunk, describes why kids love her store, she spends just as much time talking about confidence as she does about clothing. She mentions self-esteem as much as style — fitting in as much as fit.

Brand name clothing can be an automatic ticket to the “in” crowd for young kids, and it’s her lifelong mission to remove the price barrier so children can wear the brands they love and never feel left out.

She knows that pain first-hand. When Davida was four years old, her mother died. Months later, her father remarried and moved Davida and her sister from their childhood home in South Philly to Lower Merion. 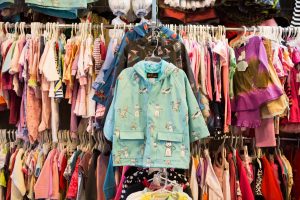 “In junior high school, everybody wore the same brand,” Davida said. “Today, it might be True Religion, but back then, it was Ladybug. A silly name, but everybody wore it. My stepmother was like the Wicked Witch of the West. She was not going to spend money on my sister and I. I felt like I didn’t fit in.”

When she became a mother to her daughter Meredith, she vowed to offer her everything she possibly could.
“Of course, I went crazy for my daughter and bought her all high-end clothing,” Davida remembered.

As her daughter grew, Davida wanted to ensure the high-quality clothing went to another good home. So, she took them to consign at the Kids Exchange, a consignment shop in Glenside, Pa. which has since closed its doors. While in line, she passed a girl’s dress she remembered seeing at her favorite boutique — one that retailed for $90. When she turned over the tag, her jaw dropped: it was $21.

“It looked brand new,” she recalled. “The only difference is that it had been previously owned. I bought it that day, and ever since, I was hooked.”

That was in the early 1980s. The only way to avoid paying full price back then was to shop at outlet stores (discounted, but still expensive) or thrift stores, “where you’re checking for stains and tears,” she said. Consignment offered a perfect solution: brand name clothing available in clean and organized stores, at less than a third of the original price.
In 1986, Davida opened the first consignment shop in Manayunk, Worn Yesterday, at 104 Levering Street. Throughout the next 31 years, she moved to four more locations before settling into her current spot at 4228 Main Street, where she’s been for seven years. Worn Yesterday carries children’s clothing from newborn to size 20 for boys, and size 14 for girls. She also sells maternity clothing and accessories like hats, shoes, and diaper bags.

“If you’re a big fan of Old Navy, this isn’t the place for you,” she said. “You’re not going to go to school and see 10 kids wearing the exact same outfit. It’s one-of-a-kind clothes for one-of-a-kind kids.”

While some of her items are secondhand, many are brand new, with the tags still on.

“Consignment doesn’t mean ‘used,’” she clarified. “It means we don’t pay for the clothes until they’re sold. It might mean we get them brand new from the manufacturer — they might be left overs from last season. It’s like an art gallery, which does not pay for every piece of art up front,” she added, but instead, takes a percentage of the final sale.

“The difference is in the price,” she continued. “Our price is under a third of regular retail cost. I have raincoats that retail for $49, and I’ll sell for $23.99. They might be last year’s, but they’re wonderful — brand new.”

The biggest cultural change Davida has seen over three decades is how popular consignment has become.

“I used to have customers who would only come in through the back door,” she recalled. “Newscasters who were on TV — they’d only come when my store was closed because they didn’t want anyone to see them shopping here.”

Now, there are numerous consignment shops on Main Street.

“I started this whole thing,” she said. “I’m a second-generation store. My customers who shopped for their kids…now those kids are shopping here for their kids.”

Over the 31 years she’s been on Main Street, her customer traffic has remained consistent due to reputation and word of mouth.

“I’ve been very lucky because I’ve always been a destination store. People drive to get to me. I don’t depend on walk bys. People always say to me, ‘You have the most fabulous clothing,’” she said.

Many of her customers are like family. Rather than call her store by name, parents affectionately say to their kids, “Let’s go to Davida’s store!” They flock to her from Lower Merion, King of Prussia, Lafayette Hill, Center City, and New Jersey.

A select few customers regularly consign with her, mostly because she has high standards for the items she accepts.
“I’m tough,” she said. “Everything has to be completely perfect: stain-free, barely worn, barely washed, and seasonal. But once you become a consigner, we take care of you. My typical consignors are over-buyers — they just like to shop! They bring me hundreds of garments at one time that never even made it on the kids before they outgrew them.”

“I’ve had the greatest customers,” she added. “Ed Snyder [co-founder of the Flyers] used to shop at my store, and I’m a season ticket holder. So, when he walked in, I was like ‘Ed! Welcome to my store!’”

That relationship eventually led to her daughter landing an internship with the Flyers.

“That’s the greatest thing about being a small business owner — the wonderful relationships,” she said. “Manayunk is such a great neighborhood to live in. It has people of all races and religions living next to each other. Everyone gets along.”

What motivates her to work six days per week, she said, is when a child puts on an outfit and glows with pride.
“Children need to feel good about themselves, and one way is when they have something they love to wear,” she said. “Kids come in and say, ‘This is where I got my favorite jacket! This is where I got my favorite t-shirt!’ I love kids. We have fun in here. I let them mark the garments for me, put the tags on with the tagging gun. Oh, they love it! I tell them, ‘Now you can get a job in a clothing store one day — when you’re in college — because you have experience!’” she laughed.

“Every generation has its brand, and children want to wear what everyone else is wearing,” she said, adding that once kids feel settled socially, they have more mental energy to focus on their school work. “Children deserve to feel good about themselves. That’s what motivated me to open my store. There’s no reason kids can’t have the brands they want, and there’s absolutely no reason to pay full price.”