As is the case with many Philadelphians, I’ve flirted with the idea of getting a bike. Seeing all the cyclists — urban or otherwise — mastering the navigation of our city and its neighborhoods is both intimidating and attractive. It takes a better man or woman to ignore the appeal of being one of those universally versatile individuals with their transportation. Beyond that initial annoyance if you’re stuck behind a pack of riders in your car, there’s something appealing about that level of passion for fitness and practical mobility. Being a runner is one thing, but being a cyclist adds another layer of pragmatism and opens up the range of geography you can accomplish in a day. 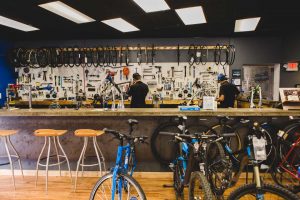 I’ve done research about bikes, asked a myriad of questions to everyone I know that has a bike, built online carts on reputable bike websites, etc. But throughout it all, I was unable to click “Buy Now” without really feeling the bike under me. I need to make sure that we’d function together as a cohesive unit. Yes, I said we — I’ve already begun to humanize an object I’ve yet to purchase. Regardless of interest, I’m understandably skittish about a purchase like this without knowing everything I can first.

Enter my opportunity to interview the co-owner of Cadence Cycling, Brady Gibney. It would become an opportunity I partly use to my benefit in figuring out the bike I should eventually get. I know, it’s super selfish sounding, but I feel like I should articulate to you where my head was at when I sat down with Brady, general manager and owner (along with Mark Davino and Dave King) for our early afternoon chat.

My intentions for the interview were clear from the get-go in contacting Brady. I let him know that I’m not necessarily interested in the procedure of canned question/answer/repeat and calling it a day. I wanted him to take me through the process of selecting a bike, all the while learning about Cadence Cycling; their offerings, goals, place in the community, and plans for the future.

Cadence Cycling is a premier cycling shop at the edge of Manayunk — where Ridge Avenue and Main Street converge — that sells and repairs all manners of bicycles. They are fully equipped to facilitate the needs of every experience level, from the daily commuters and trail riders to the weekend adventurers and professional cyclists.

It’s been two years since they moved to this location, barely a mile away from their former residence in the Nickels Building at 4323 Main St. Since then, Brady and his team have taken full advantage of their location, serving as a “gateway to all possibilities.” Brady refers to the store as such in reference to it being located at a transitional point for cyclists, between the heart of the city and all the trails that extend further west. You can legitimately ride from Philadelphia to Valley Forge with minimal to no street riding. The spot Cadence is tucked away in takes advantage of that placement as either a pit stop or turn around point for riders.

As for bikes, there’s one for every kind of rider, which can make the process of starting quite intimidating. Brady agrees and mentions that Cadence’s counter to that kind of cliquey culture is what attracted him to it when he first started there in 2007.

“The culture can be intimidating with all its nomenclature. It’s easy to feel like a fool,” he explained from both perspectives of being inside and outside of that culture.

This very sentiment spoke to my own apprehension of wanting to join in, but harboring a fear of starting with a stumble.

“[The industry] is doing a great job of cultivating a more inclusive feel, but that feeling here back then was definitely a draw,” Brady explained.

He went on to clarify that he has no delusions of grandeur about Cadence’s role in shifting the entirety of the cycling world to becoming more inclusive, just a sense of luck that he was able to find this perfect shop for him. Over the years he has been able help maintain and exploit that quality of Cadence’s service — inclusion. They want you to enjoy riding as much as they do.

The offerings of Cadence Cycling are more robust than at first blush. They offer training programs during winter months, host fitness clubs and rides, facilitate biometric screenings for riders, and plan to incorporate a café later this year. They don’t want to just sell bikes, but cultivate clientele.

“Relationships and a community — that’s what keeps us going,” Brady said.

Brady walked me around the showroom starting with the more competitive offerings on their floor — specifically modified and designed bikes that speak to the ingrained and educated cycling culture. I asked a plethora of questions to try and understand the merits of one bike tread or handlebar set up versus another, but it always came down to the same factors — purpose and comfort. Seems simple enough, so simple in fact that it took a professional to really nail it in for me.

He didn’t try to oversell me or impress me with jargon, so much as just talk with me about my needs. His easy demeanor is almost a master class in how to ingratiate a customer — just talk to me, don’t pitch me.
He settled upon a smaller sized 24-speed road bike with straight handlebars in the middle of the show room, a Giant Escape 3. Based on my questions and desired form of use, Brady pulled the bike from its stand and had me stand over it. I shook my head in agreement that the size felt right and he rolled it over to the tech for tuning. I wasn’t completely sure what came next until he handed me a helmet.

Presumably noticing the uncertainty on my face as I looked out onto Ridge Avenue, he informed me of an empty lot out back where I can ride it around. For the next 15 minutes, I was a 13-year-old kid playing around on a bike. More than once I would round the turn back up into the small parking lot and think, “One more around,” and quickly veer left into another rotation. I was simply having too much fun and didn’t care to stop. I didn’t leave with the bike that day, but I’ll be back.

Cadence Cycling has quietly been building their place in Philadelphia for over a decade now, exponentially so since relocating to the larger space two years ago. Their passion for and knowledge of the community is palpable in what they offer and host with no signs of slowing down. After my morning spent with Brady and the rest of the staff, I didn’t ever feel that discomfort of a showroom, but instead left with a desire to belong to this hobby.