How Kay Sykora has blazed Manayunk’s trails for more than 40 years.
By Megan Douress
Photography By Susan Beard (susanbearddesign.com)

If you’ve taken a leisurely stroll, a long run, or a family bike ride on the Manayunk Towpath in the last 40 years, chances are you’ve run into Kay Sykora. More often than not, she can be seen planting with PowerCorps volunteers on any given sunny afternoon or weeding into the wee hours of the evening. Even if you’ve never met her, you might just recognize her name. That could be because she has her own street, Kay Sykora Way, at Main and Lock Streets, which leads to Venice Island Performing Arts Center.

Kay has been active in the Manayunk community ever since moving to the neighborhood in the 70s. Her then-husband was an architect and brought his young family to Manayunk to do a “art community concept” for a college project. Kay, with a two-year-old in tow, found herself roaming Main Street as her new house underwent renovations. 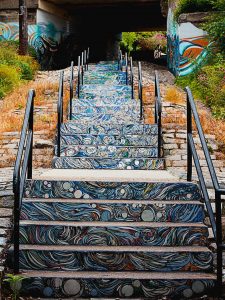 Over time, owning and operating a mill in Manayunk had its challenges. The narrow streets and steep hills made it difficult to maneuver large vehicles for industrial use. Working with key property owners, Kay felt there was potential for the mill town to evolve into a thriving commercial corridor.

“I realized that wanting to see a change wasn’t going to make it happen,” Kay remembered.

“Manayunk was actually financially viable,” Kay added. “The housing was stable and affordable, many of the folks who lived here worked in the mills, but that was changing. The neighborhood never lost their mill worker population like other city neighborhoods did, and we had the lowest crime rate in Philadelphia.”

Manayunk was a different experience for someone who grew up in the suburbs, but she came to like and respect the people who lived and worked here.

“They were really strong, hard-working people,” she said. “No secrets—everything happened out on the streets! If there ever was an issue, people responded immediately.”

Manayunk had a business association at the time, but Kay was looking to start something new — something that did more community planning and projects. She found that people who lived or worked in the neighborhood were also interested in volunteering their time to these projects, which she notes was the driving force to getting some of the early improvements done. Kay then met with consultants from Pittsburgh, the leading city in Pennsylvania for district improvements. In 1985, Kay and her team of consultants founded the New Manayunk Corporation, which later became what we now know as the Manayunk Development Corporation (MDC). The board — mostly made up of industrial property owners, was 18 people strong, Kay being one of them. There was no real staff until she became the executive director in 1988.

“I was the staff,” Kay said. “I had $18,000 as the whole budget. There I was and that was my salary for the year. You get kind of frantic because you have to pay your bills so you have to figure it out.”

MDC’s additional staff members were Gertie Solkov and Becky Cornman, both who shared a passion for improving the district. Gertie, the president of the business association, volunteered her time to doing the books, and Becky managed Manayunk’s first and only parking lot at Main and Levering Streets, which later funded the construction of five more parking lots. Parking revenue also went towards addressing complicated projects, like sprucing up the waterfront.
“Becky and I used to try and clean the canal,” Kay recalled of the early days. “We got a canoe, and our maintenance guys went in the canal. We tied them to a rope,” she laughed.

Kay and her small staff were eager to get district improvements done, and people started to notice.
“The cliff line down by Ridge Avenue and Main Street — it was absolutely disgusting. We all, including all of the merchants, went and cleaned it up,” Kay explained. “There used to be a recreation center [where Venice Island Recreation & Performing Arts Center currently is] and next to it was a vacant lot, which was more like a dumping ground. So again, we came together and cleaned it up. We eventually secured it and turned that into a parking lot as well.”

After years of closely working together, the business association and MDC merged together in the early 90s to continue addressing the physical improvements that needed to be done to the district. Kay’s vision of making Manayunk “clean” and “safe” moved forward, and along with it came improvements to the waterfront.

“We were novel in the city, so we didn’t get a lot of competition for getting things done, which was gratifying,” Kay said. “In the early days, we addressed the Main Street area because it was between the neighborhood and all of the elements along the canal. People needed to have it improved before they could get passed it [to the towpath].”

“The city probably spent anywhere from eight to 10 million dollars on the canal under the Rendell administration,” she added. “He really embraced a lot of the work we were doing. We got a lot of streetscape projects done in 1986, followed by Canal View Park, and then the Cotton Street Bridge in the mid-90s, which connected Venice Island to the rest of the neighborhood.”

As years went by, Main Street became a bustling commercial corridor, but there was still work to be done. Kay, who has always had a love of biking and nature from growing up in the country and studying horticulture, saw the waterfront as the next step to improving the district as a whole.

“I was appalled when I moved here because at that point in time, there wasn’t much green but there was so much opportunity,” she said. “The canal was mostly overgrown and undervalued. The bridges at that time were culverts with macadam thrown on top.”

“I always thought of the canal as an asset this district had that no other district had,” she continued. “But how could I make it be a stronger element?”

After nearly two decades, Kay was looking for a change, both professionally and personally. In the early 2000s, she stepped down from her position as executive director of MDC and founded Destination Schuylkill River (DSR) with funds from the William Penn Foundation.

“Everything needed to be addressed,” she continued. “The trail really needed some work. It had been done in the late 70s, of course, it’s totally illegal to fill in the canal now!”

Kay realized how important her greening initiative was to the community. Not only did she see DSR as an opportunity to improve the waterfront, but to partner with the surrounding neighborhoods — East Falls and Lower Merion — by connecting their trails with continuous improvements and programming. Her work on the waterfront made its way uphill as well, and people started pitching in.

Slowly but surely, DSR evolved into a neighborhood beautification initiative, with projects from the Manayunk Bridge pedestrian trail to building a performing arts and recreation center on Venice Island, to the many miles of murals on the towpath — all of which were spearheaded by Kay. Of course, none of it would be possible without the many partnerships along the way, including the Department of Parks and Recreation, the Philadelphia Water Department, the Department of Conservation and Natural Resources, The Circuit Coalition (which Kay sits on the steering committee), PennDOT, SEPTA, and Mural Arts of Philadelphia.

“They’re good people who care deeply,” Kay said of the people she has worked with over the years.

She’s also found that when progress is made, people respond — not just Manayunk residents, but residents from the surrounding areas, too. Every other Tuesday throughout the year, a group of volunteers rotate their efforts to designated clean up spots for two hours. Clean up locations include Manayunk (like the Fountain Street steps), the Roxborough Reservoir, Germany Hill, and the Manayunk Canal. The cleanups always end with drinks at a local watering hole.

“In this process, I’ve found a lot of interesting neighbors who are willing to just do all of this work as volunteers to make this neighborhood strong,” she said. “I can’t say that they help me. We help each other, and I didn’t necessarily create them.”

DSR continues to evolve, but Kay stays true to her mission of greening, cleaning, and beautifying Manayunk and the surrounding areas. Her work days are never the same, however. Today, for example, she just came from an impromptu meeting on the Manayunk Bridge with other city organizations to discuss the lighting that is to be installed in the upcoming years. She explained that some senior bike riders happened to be in the area and had suggestions for how to make the trail connector better. On other days, she’ll work from her home office or “from the trail.” She admitted that throughout her 30 years of working in Manayunk, the fact that MDC set the precedent for other community development corporations makes her the most proud. And while Kay starts to think about taking another step back from her work, she first needs to take a step forward and get others to stay engaged.

“I just think we’re blessed to have access to really nice green spaces that are set in an urban environment,” she said. “That is pretty unique. It’s a good chance for people to be educated without being educated — to see it and experience it. The sense of community and the community piece is the most important part. It’s gratifying.”

Editor’s Note: This November, The Schuylkill Center for Environmental Education will present Kay with The Henry Meigs Award for Environmental Leadership. The award is given each year for exceptional and visionary environmental leadership. Selected by a committee of staff and trustees, the award is being given to Kay for her decades of hard work and leadership on establishing the multi-use trail through Manayunk while advocating for the completion of The Circuit regionally. She also is awarded for her work focusing Manayunk’s attention on the Schuylkill River, of getting Philadelphians back onto the river, and for her helping establish Roxborough Green.