Take a bite out of our historic neighborhood with a food tour this fall.

On any given Sunday morning in the fall, you’ll find a crowd of people lining up for tomato pie outside of Marchiano’s Bakery. It’s the snack of choice for football fans residing in Manayunk. But October Sunday mornings have even more of a hustle and bustle to them. A group of foodies stand outside waiting for the start of Chew Philly’s Haunted Food Tour, a haunted twist on the year-round food tour — and a taste of cheesesteak tomato pie.

Chew Philly Food Tours started in 2011 when founder, Elyse Castillo, was looking for a way to work around her new role as “mom.” Elyse previously worked on tours in Chicago and had also been a food and beverage director for dining cruises, but when it came to having her oldest son, she didn’t want to put in the hours required in the tourism industry. Her husband, Jason, came up with the idea to combine what she loved to do with a more flexible, kid-friendly schedule.
Elyse said she found her first love — tourism — through her former job at Seadog Speedboat Tours in Chicago.

“Everyone I worked with was so happy,” Elyse said. “I got to be outside all day and meet all kinds of people. Obviously, I had the everyday challenges of tours that you run into, but it was fun to solve those problems. That was a big part of knowing I wanted to do tours and also knowing I wanted to do walking tours.”

Another reason why she wanted to do walking tours? Cost.

“Those boats spend nearly $30,000 a month on fuel. That was when I was like, ‘Definitely going to stay away from having those crazy increases in cost!’” Elyse explained. 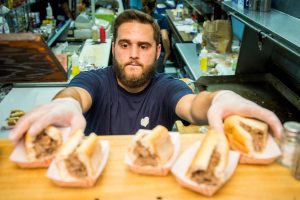 Shortly after, Elyse worked with Seadog Speedboat Tour’s sister company, where she became the Food and Beverage Director for dining cruises. She got a true interest in the food industry from getting to know the chefs on the cruises and learning how food can impact a person’s experience. With that said, she credits her love of food to her upbringing in Detroit, which she explained has a “hidden food scene,” from Coney Island hot dogs (which are not from Coney Island!), to the Greek neighborhood in the city, and lots of authentic Middle Eastern food.

“I was exposed to a lot of different kinds of foods there. I also lived in Chicago, which has a lot of great cultural foods—the Chicago dog and the deep dish pizza,” Elyse said.

“I guess I’ve just been lucky to keep living in cities that have these awesome cultural foods,” Elyse added. “But I think it’s been something from the time I was young through now — I’ve enjoyed getting to know a specific region’s foods.”
Which brings Elyse to Manayunk. When Elyse moved to Philadelphia, she and Jason searched for the perfect neighborhood to start her new food tour business. Little did they realize one of the best food neighborhoods was right in their own backyard.

“We looked at all of these neighborhoods and Manayunk ended up being our favorite one, which was perfect because we already lived here,” Elyse said. “It just ended up being a really good fit.”

While residents and guests can agree that Manayunk is certainly considered a food destination, Elyse found that it was the long-time food businesses that really drew her in.

“Places like Marchiano’s and Sorrentino’s have been in business for 30 years,” she said. “It doesn’t happen on accident. It’s them doing the same thing well over and over again and staying focused. That’s something that a lot of businesses can learn from—staying true to themselves and being consistent with what their products are.”

On Fridays and Saturdays at 11:30 a.m., and Sundays at 10:30 a.m., tour guests gather at Marchiano’s for their first taste of Manayunk tradition — tomato pie. Elyse explains how the bakery has had celebrity fans from the start, from Frank Sinatra to current Phillies players. She even gives guests, some of which have traveled as far as Milwaukee, a chance to talk to the owners about how they keep customers coming back for more.

On the authentic food tour, guests are treated to a soft pretzel from Tasty Twisters and some facts about the Manayunk Bridge for their walk to Sorrentino’s Deli. It’s here that guests get a taste of the traditional Philly cheesesteak. Elyse explains the deli used to be a butcher shop in the early 1900s, and even points out the original butcher hooks hanging at the counter.

From there, the group makes their way up the steps at Cresson and Cotton Streets for a brief stop at Pretzel Park. Stopping at the only statue of food in the neighborhood is a given, but it’s the quick history of the park and the surrounding churches that gives guests that extra taste of tradition and history. The tour then goes down Cotton Street to Main Street to stop at one of the mural portraits from the “Look Long & Look Good” project that lines Main Street. Before sitting down for family-style dan dan noodles at Han Dynasty, the small tour stops to look at a man in a Phillies shirt holding a fishing net. The portrait is called “Catfish,” and was inspired by a photograph from the first Canal Day in Manayunk.

At Han Dynasty, one of Elyse’s favorite restaurants in the neighborhood, guests discuss their favorite foods of the tour at this halfway point. They then make their way to a few doors down at Volo Coffeehouse for La Colombe’s cappuccino and macarons from Nutmeg Cake Design. On the haunted tours, guests are treated to spiced cider and hand-painted pumpkin spice caramel chocolates by John and Kira’s Chocolates at this stop.

“They’re really beautiful,” Elyse said of her favorite food of the haunted food tours. “They’re an unexpected part of the tour even though they’re not as substantial as some of the other tastings. I think they make a big impact for being a small, local chocolate company.” 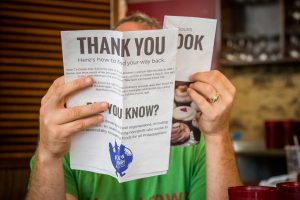 Last but not least is a Manayunk newcomer, Tubby Robot. While the shop is a bit tight for all guests to go inside, the tour stops out front and Elyse goes into detail about how the business was developed, from seeking input from an ice cream expert (and creator of cookies and cream ice cream) to making their own whipped cream. Guests take their bowls of ice cream and head to Canal View Park for the grand finale, where Elyse asks for everyone’s favorite foods from the tour. Without hesitation, the group decided that the world famous tomato pie takes the cake.

“Honestly, it’s the perfect time of year for food tours — the leaves are changing, it’s cool outside, the towpath is beautiful,” Elyse explained. “Besides the food being exactly what you want to eat at that time of year — lots of pumpkin, apple, and savory foods — it’s also just a beautiful time to be walking around Manayunk.”

And of course, the haunted food tours aren’t complete without ghost stories. One of the stops has spooked staff members with the sounds of footsteps and flickering lights. We’d tell you which stop it is, but you’ll have to experience it for yourself!

Chew Philly’s Food Tours take place every Friday and Saturday at 11:30 a.m. and every Sunday at 10:30 a.m. all year round, but if you’re up for the haunted version, they run from October 13-29. A portion of every ticket sold goes to the Food Trust’s mission of ensuring everyone has access to affordable, nutritious food and information to make healthy decisions. Book your tour by visiting phillyfoodtours.com.